The wide variation in symptoms among children with autism led to the concept of Autism Spectrum Disorder, or ASD.

Autism Spectrum Disorder (ASD) affects more than 1 % (one in one hundred) of the children in the U.S., more often among boys than girls.

Early diagnosis and treatment of Autism Spectrum Disorder (ASD) can help a child with autism make gains in language and social skills. 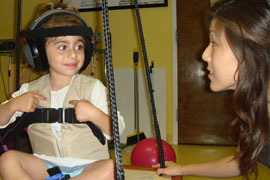 Because there are not specific medical tests for autism, it’s best to get a diagnosis from a physician or psychologist who specializes in developmental disabilities and has experience diagnosing Autism Spectrum Disorders (ASDs). The diagnosis is made by taking into account the child’s complete medical and behavioral history, observation of the child’s behavior, and ruling out other problems that may cause some of the same symptoms.

Each child with an Autism Spectrum Disorder (ASD) will have his or her own pattern of autism. Sometimes, a child’s development is delayed from birth. Some children seem to develop normally before they suddenly lose social or language skills. Other children with Autism Spectrum Disorder (ASD) show normal development until they have enough language to demonstrate unusual thoughts and preoccupations. In some children, a loss of language is the major impairment. In others, unusual behaviors (like spending hours lining up toys) seem to to be the dominant factors.

Parents are usually the first to notice something is wrong. But a diagnosis of autism is often delayed as parents or a physician may downplay early signs of autism, suggesting the symptoms are “just a phase” or a sign of a minor delay in development. Children with a possible autism spectrum disorder should be evaluated by a professional team with experience in diagnosing autism.

The Goals of Autism Spectrum Disorder (ASD) Treatment Can Include:

At Bergen Pediatric Therapy, we believe that by bringing this team under the same roof we can provide better treatment that is more convenient. Please call us or contact us to learn how we can help your child or schedule a complimentary evaluation of your child’s needs and free facility tour.

There are currently over 300 different treatments for their children with autism. At the heart of the issue of the many treatments for Autism spectrum disorder is that what most people call “autism” is actually a spectrum of disorders that may or may not turn out to have different causes. Autism spectrum disorder or ASD includes the specific diagnoses of autistic disorder, Asperger’s syndrome, and pervasive developmental disorder-not otherwise specified or PDD-NOS.

What we do know is that Earlier Autism Treatment Is Better Autism Treatment. Perhaps the biggest breakthrough in autism treatment to date is the recognition that pediatricians can identify most (but not all) 24-month-old and even 12-month-old children with autism.

The parents’ involvement is very important to the educational and social development of autistic children. The earlier treatment for autism begins, the better the child’s chance of developing important skills. Early treatment can greatly help most children with autism. Treatment for children with autism spectrum disorder usually reduces symptoms of autism, regardless of the child’s age or the severity of the condition. We created Bergen Pediatric Therapy  to be able to offer a centralized setting designed to meet the needs of the children while providing an environment of support and resource for the parents.

Can a child with Autism Spectrum Disorder ever move off the Spectrum?

Growing evidence suggests that a small minority of persons with autism progress to the point where they no longer meet the criteria for a diagnosis of autism spectrum disorder (ASD). Various theories exist as to why this happens. These theories include the possibility:

Also, children diagnosed with autism sometimes reach “best outcome” status means they have scored within normal ranges on tests for IQ, language, adaptive functioning, school placement and personality, but still have mild symptoms on some personality and diagnostic tests.

Some children who no longer meet the criteria for a diagnosis of autism spectrum disorder are later diagnosed with attention deficit and hyperactivity disorder (ADHD), anxiety disorder or a relatively high-functioning form of autism such as Asperger Syndrome.

Significant improvement in autism symptoms is most often reported in connection with intensive early intervention. However, experts cannot predict which children will have such responses to therapy. Therefore early profesional intervention is the best hop for people with autism. In conclusion, many people with autism go on to live independent and fulfilling lives.

In the U.S. the Individuals with Disabilities Education Act (IDEA) guarantees a free and appropriate public education for every child with a disability, including those with Autism spectrum disorder.

At Bergen Pediatric Therapy we combine all of the therapies together with a   team centered by collaborating with physicians, therapists, and others involved in the child’s care.